Wonder Woman came to Man’s World to spread peace and justice … but there are some for whom Diana is only a pawn. They’re called Godwatch, and they’ll use unimaginable power to accomplish one mission—capture Wonder Woman and use her to gain access to her hidden home of Themyscira.

Now Godwatch have Steve Trevor and his team on the run and they’ve turned Diana’s ally Barbara Ann Minerva back into the crazed killer Cheetah. But Wonder Woman can’t help. She’s discovered that she’s been lied to for years by the gods she trusted, and it’s driven her insane. 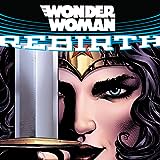