THE REIGN OF THE GODS

For four years, he has ruled humanity with an iron fist. His enemies have been scattered or slain, though some still fight on. He is Superman, the most powerful being in the world...but not in all worlds.

A stunning scheme has unleashed the Gods of Olympus on Earth, and they've seized the reins of power from the Man of Steel. But though they have ended his tyranny—for now—the cure may be worse than the disease. Now an unlikely alliance of friends and foes must fight to defeat these beings of indescribable magic and might using every weapon at their disposal.

And they must not forget that they're not the only ones with weapons. Because if the war between gods and heroes doesn't end soon, the nuclear-armed nations of Earth may all take aim together and end it once and for all... 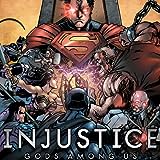