Bruno Premiani, the Doom Patrol was reborn a generation later through the singular imagination of a young Scottish author - and the result took American comics in a wholly unexpected direction.

In forging their new path, the reborn World's Strangest Heroes left behind almost every vestige of normality. Though they are super-powered beings, and though their foes are bent on world domination, all that is conventional ends there. Shunned as freaks and outcasts, and tempered by loss and insanity, this band of misfits faces threats so mystifying in nature and so corrupted in motive that reality itself threatens to fall apart around them - but it's still all in a day's work for the Doom Patrol. 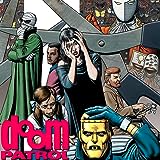 Doom Patrol (1987-1995)
Join the team of superhero misfits known as the Doom Patrol as they tackle the strangest and most bizarre cases in the DCU!

Animal Man (1988-1995)
Buddy Baker is your average family man...who just happens to possess the power to absorb the characteristics of the entire animal kingdom. Award-winning writer Grant Morrison made his DC Comics debut with this existential look at one of DC Comics' classic characters!
Doom Patrol (2016-2018)
The atoms are buzzing. The daydreams crowd sentient streets, and the creative team has been warned, “Turn back now or suffer the mighty consequence of sheer, psycho-maniacal mayhem.” Generation-arsonists unite—this is DOOM PATROL, and the God of the Super Heroes is bleeding on the floor. A blenderized reimagining of the ultimate series of the strange, DOOM PATROL combines elements from cl
Flex Mentallo
Once he was Hero of the Beach...and of the Doom Patrol. Now Flex Mentallo, the Man of Muscle Mystery, returns to investigate the sinister dealings of his former comrade, The Fact, and a mysterious rock star whose connection to Flex may holding the key to saving them both. This fast-paced tale twists super-hero tropes, introducing one mind-boggling concept after another.
The Invisibles
From the mind of acclaimed creator Grant Morrison! Throughout history, a secret society called the Invisibles has worked against dark forces seeking to repress humanity's growth. Now, the Invisibles' latest recruit, a London teenager, must survive a bizarre, mind-altering training course!