Terry McGinnis has returned to Neo-Gotham. The mantle of the Bat is his to claim. There’s just one thing standing in his way: everything.

An entire legion of the deadliest enemies this brave young Batman has ever faced awaits the returning hero, determined to destroy him before he can ever take to the Gotham skies again. Street to street, corner to corner, building to building: Terry will be forced to wage war for every foot of ground in order to reclaim his city and his legacy.

His incredible new Batsuit can’t save him. His mentor, Bruce Wayne, can’t protect him. His allies have no chance to assist him.This is a one-man war for the soul of a city. And there can be only one winner…

The fight of Terry McGinnis’s life begins — and ends? — in Batman Beyond Vol. 3: The Long Payback, from the creative team of Dan Jurgens and Bernard Chang. It’s a non-stop action tour-deforce for one of the most beloved heroes in the DC Multiverse! Collecting Batman Beyond #13-19.
See More See Less 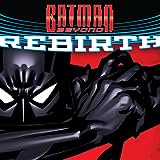 Batman Beyond (2016-)
Six months have passed since the events of BATMAN BEYOND #16. While areas of destruction remain in the outside world, Gotham City has made great strides toward reclaiming its bright future. But new threats arise and old adversaries may be coming back. And the question still remains: whatever happened to Bruce Wayne?

Nightwing (2016-)
He's been Robin, Batman, a spy, a ghost. Now, Dick Grayson returns to Gotham City to reclaim the life that was taken from him. But when a new evil threatens those he loves most, Nightwing faces being torn away from home once again in order to destroy the dark force once and for all. Powerhouse artist Yanick Paquette (BATMAN, SWAMP THING) joins series writer Tim Seeley (GRAYSON, BATMAN & ROBIN ETER

Red Hood and the Outlaws (2016-)
When a shocking encounter with Batman solidifies the Red Hood's status as a villain, Jason Todd goes deep undercover to take down Gotham City's criminal underworld from the inside. Along the way, Jason meets two unlikely allies: a disgraced Amazon warrior named Artemis and a half-baked Superman clone called Bizarro—and the DCU's "Dark Trinity" is born!

Batman Beyond (2015-2016)
At last, Batman Beyond gets his own ongoing series in THE definitive future of the DCU! But this isn't the Beyond you think you know! With the Justice League missing and without Bruce to guide him, this new Batman will need to explore this bizarre world on his own, while fighting to raise humanity from an opponent that's already won. The heroes Batman knew have failed, the world he knew has been t
Batgirl (2016-)
The Batgirl you know and love is going global with Eisner Award-winning and New York Times best-selling writer Hope Larson (A Wrinkle in Time, Goldie Vance) and all-star artist Rafael Albuquerque (AMERICAN VAMPIRE). In order to up her game, Babs travels to Japan on a quest to train with the most elite modern combat masters of the East. But when a chance meeting with an old friend puts a target on